Prosumer electricity trading - peer-to-peer trading of green electricity between renewable prosumers - has a huge potential in the European Union and could become a reality tomorrow - given a few regulatory policy changes. This is the result of the study "A Proposal for Prosumer Electricity Trading", written by the Berlin electricity market experts Energy Brainpool, commissioned by Bündnis Bürgerenergie.

We show: the European Commission's and the European Parliament's proposal for a strong and liberalised Prosumer Electricity Trade in the upcoming Renewables Directive is a huge chance for the Energy transition and millions of prosumers and energy communites in Europe! Using the example of the German market, the study shows how just a few regulatory changes can have a huge impact in enabling and incentivizing an outright revolution of decentralised Energy. 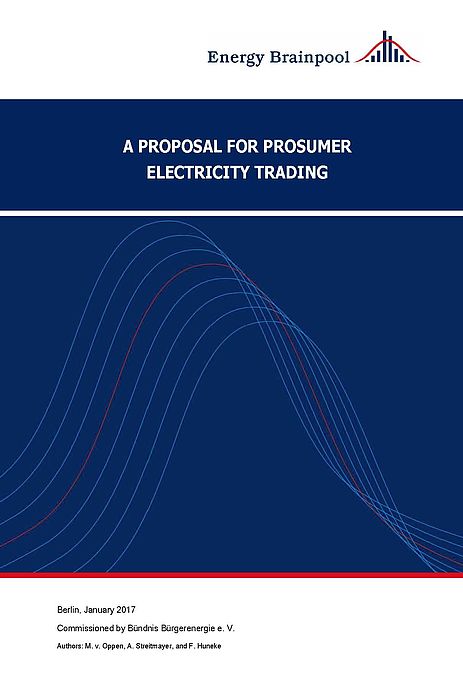 LEARN MORE ABOUT THE STUDY!

Energy Brainpool’s proposal illustrates the comparatively low legislative and energy-related expenditure needed to facilitate the trade of consumer-generated electricity for the German market. It thus highlights the advantages of a decentralized and consumer-friendly market not only for Germany, but for the whole European Union. It would reduce operating costs as defined by Germany’s Renewable Energies Act (EEG) – costs now covered by consumers of electricity – and significantly enhance usage of the public grid to transmit power from local photovoltaic systems. The benefits of prosumer electricity trading would go far beyond these economic and technical effects; finally, not only homeowners who have their own PV systems would stand to benefit. Electricity bills for the entire neighbourhood could be lower. All parties involved could join forces and invest together in storage systems to further reduce costs. This would be fairer than the present system and turn the energy transition into a community experience, helping to broaden its acceptance. Additionally, this development would result in the optimal use of roof space for PV panels. Today, only small systems are installed, even on large roofs, to provide only as much power as can be consumed within the building itself – clearly a disincentive in the current legislative framework. Changing this would quickly, cheaply and efficiently drive the energy transition forward, particularly in urban settings.

Given these obvious advantages, it is high time for a “second liberalisation of electricity markets”. The first took place twenty years ago when large electricity suppliers lost their regional monopolies. Nevertheless, there is still a monopoly on consumers. In today’s system, every household gets its electricity from a single power provider. If prosumer electricity trading were introduced, each household would still keep its regular supplier but would also be free to buy power from neighbours whenever these could provide cheaper and cleaner solar energy.